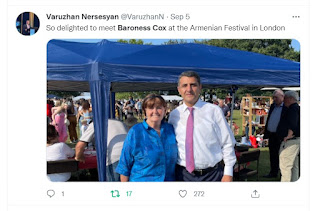 Speaking to Lady Cox before she boarded her international flight out of Paris she spoke of the festival with great fondness and said
"I enjoyed the festival very much, thank you to all my followers and friends I met for a wonderful time and kind comments on social media."
Below is a segment taken from the Public Radio of Armenia. (AH)

Armenian Ambassador to the UK Varuzhan Nersesyan participated in the traditional Armenian Summer Festival, organized by the Committee of the Armenian Diocese in Great Britain and Ireland, the Armenian Embassy in UK informs.

The event started with a minute of silence in memory of the Armenians who sacrificed their lives during the 44-day war unleashed by Azerbaijan against Artsakh last year.

In his opening remarks, Ambassador Nersesyan attached importance to the organization of the event, during which the best traditions of Armenian culture, history, art and cuisine were presented..

He also stressed the important role of the British-Armenian community in the development and strengthening of bilateral relations, pledging to do his best to expand that cooperation.

Bishop Hovakim Manoogian, Primate of the Armenian Diocese of Ireland, Baroness Cox, Member of the House of Lords, Rupa Hook, Member of the UK Parliament, Patrick Sukhdeo, President of the Barnabas Foundation, Chairman of the British-Armenian Community Council Armand Abrahamyan, the Mayor of Ealing attended the event.