Blockade of the Lachin Pass

Blockade of the Lachin Pass
Trying to catch up with Caroline these days is at times a challenge for me, I have been providing parliamentary reserach and opinion / advice for over seven years and this website now in its fith year on voluntary basis.
Have included this below from House of Commons Library Parliamentary research team published 18th Jan 2023. Link at the end for the full report. Have done my best. (AH)
Closure of the Lachin Corridor and the humanitarian situation in Nagorno-Karabakh
The Lachin C orridor is the only transport link between Armenia and the enclave of Nagorno-Karabakh. Under the terms of the November 2020 ceasefire agreement, Russian peacekeepers patrol the corridor, while Azerbaijan is obliged to guarantee safe passage, in both directions, for civilians, vehicles and cargo.
In early December 2022 the Azerbaijani Ministry of Ecology made a statement suggesting that natural resources were being illegally mined in the Nagorno-Karabakh region and asked Russian peacekeepers to monitor the situation. Azerbaijani civilians blocked the Lachin Corridor in a protest which lasted for several hours until an agreement was reached between the Commander of Russia’s peacekeeping forces in the region and the Azerbaijani government to allow Azerbaijani officials to carry out inspections at the mines in Nagorno-Karabakh.

Azerbaijani officials reportedly visited the mines on 10 December but were denied access by Armenia. In protest, on 12 December a group of Azerbaijani’s claiming to be environmental activists once again bypassed Russian checkpoints and set up tents on the main road effectively blocking the Lachin Corridor.
Read more »
No comments:

Happy New Year to all my friends and readers! 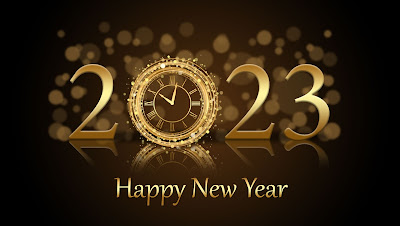 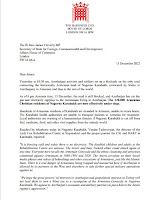 The letter from Baroness Caroline Cox and Dr John Eibner, International President of Christian Solidarity International (CSI), urges the UK Government to use its favour with Azerbaijan immediately to cease its policies of inflicting this intense suffering on the Armenians living in Nagorno Karabakh.

We encourage our supporters and followers to write to their MPs, urging the UK Government to take action. 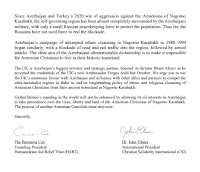 Here also is an article in NEWSWEEK written by SHEILA PAYLAN , HUMAN RIGHTS LAWYER
ON 12/14/22 AT 10:47 AM EST
(Please ensure you read the full article provided on the link below)
Since Monday, 120,000 ethnic Armenians in the Nagorno-Karabakh enclave have been held under siege as Azerbaijan has blocked the humanitarian Lachin corridor, their only link to Armenia and the outside world, and cut off their gas supply as temperatures plummet to freezing levels.

This marks a dangerous new phase in the south Caucasus: recent events have put paid to the high hopes that existed when a Russian-brokered ceasefire ended the brutal six-week war launched by Azerbaijan in September 2020 (that included hell raining from drones in the sky).
Read more »
No comments:


Caroline also would like to thank all her readers here and the growing number of followers on social media and all their support during what has been a very challenging year for everyone.
1 comment:

It has now been five years since first launching this website for my dear friend, Baroness Cox.

It all started when being treated by Caroline to tea cakes in the House of Lords in 2016 with my daughter. We asked with so many staff and helpers why haven’t you got your own website and social media?

Caroline replied, “I don’t know. There was someone who once tried to put up a website.” My daughter said my dad will sort this out for you. I’ve done so voluntarily now for five years since launching the website in 2017 and also the Twitter. I set up Baroness Cox News Twitter in October 2020.