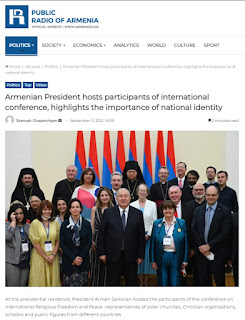 At the presidential residence, President Armen Sarkisian hosted Baroness Cox and the participants of the conference on International Religious Freedom and Peace -representatives of sister churches, Christian organizations, scholars and public figures from different countries.

(Please ensure that you follow the link to read the rest of this important article at the end.)

The Director of the Foreign Relations and Protocol Department of the Mother See, His Grace Archbishop Nathan Hovhannisyan presented the purpose and agenda of the conference, noting that the current challenges of the world, as well as a number of problems facing our people in the post-war situation were discussed during the conference organized by the Mother See’s Propaganda Center and the Artsakh Committee for the Preservation of Cultural and Cultural Heritage.

“We focused on the issues of preservation of Armenian religious and historical-cultural monuments in the territories outside the Armenian control, not only in terms of preserving their physical condition, but also in terms of their continued functioning,” he said.

The President noted that different peoples define their own national identity differently, and the Armenian identity is based on the Christian faith and the church. “It is not only about faith, the role of the church, but also about the national identity of Armenians. You can lose in battle, you can lose in war, but if you do not lose your identity, you will always be ready for further victories, because you have faith, a strong identity, you are a surviving nation. We are really a surviving nation. Survival includes respect for others, as well” said President Sarkissian.

“Visiting every city and village in Artsakh, you discover the history, rich cultural and architectural monuments. As President of Armenia, I felt proud when I was in Shushi. I was proud not only for the fact that the city had wonderful churches, but I was also proud that my compatriots had invested effort and finances to restore the mosque in Shushi. This speaks not only of religious freedom, but also of human behavior,” the President continued.

The President emphasized that today, like any Armenian, he is concerned about the fate of thousands of historical and religious monuments, which are not under the control of the Armenian side. “These concerns are justified, because when we go more than a hundred years back, we remember the Armenian Genocide, when Armenians lost not only their homeland, but also most of our churches, cultural centers, architectural monuments, which were systematically destroyed. Taking into account all that, we can say that the territories that are under the control of the Azerbaijanis today will have the same fate,” the President said.