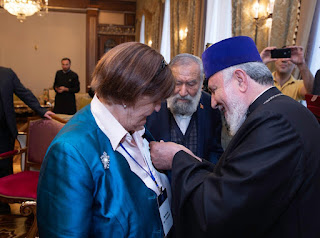 His Holiness Karekin II, Supreme Patriarch and Catholicos of All Armenians, received in the Mother See of Holy Etchmiadzin member of the House of Lords, Baroness Caroline Cox.

His Holiness expressed his joy for Baroness Cox’ visit to Armenia and her participation in the conference on International Religious Freedom and Peace. His Holiness appreciated the Baroness’ efforts in various international instances to protect the right of the Armenians of Artsakh to live freely and independently, as well as to provide constant support and assistance to the children of Artsakh. 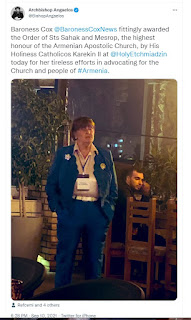 In appreciation of the praiseworthy services rendered by Baroness Caroline Cox to the Armenian people and the Armenian Church, the Catholicos awarded her with the high order of St. Sahak-St. Mesrop of the Armenian Apostolic Church.

In her turn, Caroline Cox thanked the Armenian Patriarch for such a high honor. The Baroness assured His Holiness that she would continue to speak from various international platforms about the atrocities committed by Azerbaijan against the Armenians of Artsakh and the Armenian cultural and religious heritage.
Please read the rest and see further pictures by clicking here for the original source -