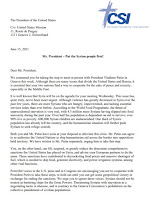 Baroness Caroline Cox writes: Mr. President – Put the Syrian people first!
Baroness Cox today wrote two letters with CSI (Cristian Solidarity International) Dr. John Eibner to President Joe Biden and President Putin urging them to lift sanctions and preserve the Idlib Border for aid deliveries in Syria.
I have put the text of the letters in full below they are identical in content *AH :
The President of the Russian Federation
C/o: Permanent Mission of the Russian Federation
to the United Nations Office in Geneva
Avenue de la Paix 15 1202 Geneva,
Switzerland
June 15, 2021
Mr. President – Put the Syrian people first! Dear Mr. President, We commend you for your willingness to meet with President Joe Biden in Geneva this week. Although there are many issues that divide the United States and Russia, it is essential that your two nations find a way to cooperate for the sake of peace and security, especially in the Middle East.

It is well known that Syria will be on the agenda for your meeting Wednesday. This issue has, quite truly, never been more urgent. Although violence has greatly decreased in Syria over the past few years, there are more Syrians who are hungry, impoverished, and lacking essential services today than ever before. According to the World Food Programme, the threat of unprecedented starvation is very real, with 4.5 million more Syrians having slipped into food insecurity during the past year. Over half the population is dependent on aid to survive; over 90% live in poverty. 600,000 Syrian children are malnourished. One third of Syria's population has already left the country, and the humanitarian situation will further push Syrians to seek refuge outside. 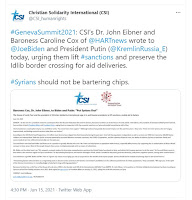 Both you and Mr. Biden have tools at your disposal to alleviate this crisis. Mr. Biden can and should lift, suspend, or greatly reduce the draconian comprehensive sanctions the United States has placed on Syria, and advise his European partners to do the same. We have written to Mr. Biden separately, urging him to take this step.
You, on the other hand, can agree to re-authorize the United Nations to ship humanitarian aid across the border into opposition-held territory, especially Idlib province, where over three million Syrians now live, the vast majority of whom are destitute displaced people who depend on this aid to survive.
Powerful voices in the U.S. press and in Congress are encouraging President Biden not to cooperate with you to resolve these issues, to hold out until he can get some geopolitical victory in exchange for ending the sanctions. We urge him to ignore these voices, and we likewise urge you to ignore any voices from within your country encouraging you not to cooperate for the benefit of the Syrian people. Syrians should not be treated as bartering chips for the Great Powers. Threatening Syrians with starvation as a negotiating tactic is obscene and is contrary to the Geneva Convention’s prohibition on the collective punishment of civilian populations
Together, we urge you and Mr. Biden, in the spirit of the Geneva Conventions, to mutually pledge to help Syria’s long-suffering population, by lifting the economic sanctions on Syria, and assuring the delivery of humanitarian aid to all areas of the country.
Most Respectfully,
The Baroness Cox of Queensbury Independent Member of the House of Lords
Dr. John Eibner International President Christian Solidarity International
Christian Solidarity International
International Headquarters
Zelglistrasse
64, 8122 Binz ZH,
Switzerland
(END)
CSI - Christian Solidarity is a multi faceted organization, entities are based in several countries. CSI Based in Switzerland, with affiliates in the United States, Czech Republic, France, Germany, Hungary, Italy, South Korea, and the Netherlands.
The organization is described on Charity Navigator for its Canada entity as - Christian Solidarity International (CSI) was founded in 1977 in Switzerland by Rev. Hans Stückelberger, following peaceful demonstrations in support of persecuted Christians. CSI's objective is worldwide respect for the God-given right of every human being to choose his or her faith and to practice it, as stipulated in Article 18 of the Universal Declaration of Human Rights: “Everyone has the right to freedom of thought, conscience and religion; this right includes freedom to change his religion or belief, and freedom, either alone or in community with others and in public or private, to manifest his religion or belief in teaching, practice, worship and observance.”

The Baroness Cox connection with CSI:  This except taken from Wikipedia -
In the 1990s, several groups broke away from the central CSI organization and became independent NGOs. These splinter groups include International Christian Concern, founded by Steve Snyder in 1995,[13] Christian Solidarity Worldwide, founded by Baroness Caroline Cox in 1997,[13] and Christian Freedom International, founded by Jim Jacobson in 1998.[14]
Also during the 1992–93 Armenia-Azerbaijan war, CSI broke Azerbaijan’s blockade of the contested Nagorno-Karabakh territory numerous times to deliver humanitarian aid and document acts of violence against the Christian Armenian inhabitants of Nagorno-Karabakh. CSI also partnered with the Andrei Sakharov foundation to send aid to Azeri-Turk refugees from Nagorno-Karabakh. Witnessing the war on the ground, CSI published a detailed account of the first Nagorno-Karabakh War titled "Ethnic Cleansing in Progress: War in Nagorno Karabakh" co-authored by John Eibner and Baroness Caroline Cox.[10]
Baroness Cox and CSI’s involvement with Sudan began in 1992, when two of CSI’s leaders, Dr. John Eibner and Baroness Caroline Cox, traveled to southern Sudan at the invitation of local churches to observe the effects of civil war on the Christian populations there. CSI began to document and publicize massacres and slave raids carried out by the Arab-led central government and its tribal allies against the largely Christian, traditionalist peoples of southern Sudan. CSI was the first advocacy group on the ground in Sudan.[11]
Link to above source Wikipedia
Here also you can read other posts on this website liked to the above topics here -