Baroness Cox writes to Boris Johnson as he faced renewed calls to lift sanctions against Syria, in urgent letters signed by over 90 politicians and experts

Both Joe Biden and Boris Johnson faced renewed calls to lift sanctions against Syria, in urgent letters signed by over 90 politicians, human rights experts and some of the most senior church leaders in the Middle East.

The letters warn that “millions of hard-pressed Syrians will go to bed hungry and cold tonight,” and that “the COVID-19 pandemic is raging through the country, unhindered by a healthcare system largely destroyed over ten years of war.” They say that sanctions, which are backed by Biden and Johnson, “make the economic plight of the Syrian people worse.”
You can read the open letter written to President Joe Biden by clicking this link. *(AH)

Signatories to the letter to Boris Johnson include two former British ambassadors to Syria, two former Archbishops of Canterbury, General Lord Dannatt, Admiral Lord West, European diplomats and academics, senior Syrian church leaders, and the General Secretary of the Middle East Council of Churches, which represents all the member churches in the region.
Here is the text of the letter written by Baroness Cox in full:

Rt Hon Boris Johnson MP
Prime Minister
House of Commons
London SW1A 0AA
21 January 2021
Dear Prime Minister,
The UN Special Rapporteur on Unilateral Coercive Measures, Professor Alena Douhan, appealed at the end of December for the United States to lift its complex web of economic sanctions that severely harm the people of Syria – sanctions that have not been approved by the UN Security Council.

The Special Rapporteur stated that U.S. sanctions “violate the human rights of the Syrian people” and “exacerbate the already dire humanitarian situation in Syria, especially in the course of COVID-19 pandemic,” by blocking the aid, trade and investment necessary for Syria’s health system and economy to function. The Special Rapporteur’s findings reflect a growing consensus within humanitarian aid and human rights communities that this form of collective punishment of the civilian population is driving Syria into an unprecedented humanitarian catastrophe.
Ten years ago, Syria was a breadbasket for the region. Today it is on the verge not just of hunger, but starvation, according to the World Food Programme (WFP). Last June, WFP’s Director, David Beasley, warned that half of all Syrians were going to bed hungry and that the country was on the brink of “mass starvation.” Meanwhile, the COVID-19 pandemic is raging across the country, unhindered by a healthcare system largely destroyed after ten years of war.

Millions of hard-pressed Syrians will go to bed hungry and cold tonight. Unilateral coercive measures imposed by the United States make the economic plight of the Syrian people worse.
Ten years ago, the UK, as a member of the EU, aligned itself with the United States’ Syrian regime change policy. Broad economic sector sanctions were imposed in a coordinated action. Since then the UK has broadened steadily its own sanctions regime, and has cooperated with the execution of the United States’ extrajudicial, extraterritorial secondary sanctions.
2) This month, consequent upon leaving the EU, the UK, rather than taking the opportunity to change a failed policy, chose to realign itself with EU sanctions on Syria via the full entry into force of the Syria (Sanctions) (EU Exit) Regulations 2019. This policy has not only failed in its intentions, but has exacerbated the suffering of the Syrian people.

We urge you to help Syrians to alleviate a humanitarian crisis, which causes profound suffering to the civilian population and threatens a new wave of instability in the Middle East, by:
1) Endorsing the UN Special Rapporteur’s recommendation;
2) Terminating the UK’s own economic-sector sanctions against the Syrian people;
3) Protecting UK citizens and institutions from the coercion of the United States’ extraterritorial and extrajudicial secondary sanctions.
We believe that the national interests of the United Kingdom can be pursued without using economic sanctions to collectively punish the people of Syria.
Yours sincerely,
Baroness Cox
Lord Green of Deddington, British Ambassador to Syria 1991-94
Peter Ford, British Ambassador to Syria 2003-06
Lord Dannatt, Chief of General Staff of the British Army 2006-09
Lord West of Spithead, First Sea Lord and Chief of Naval Staff 2002-06
Major General John Holmes, Director of Special Forces 1999-2001 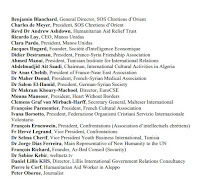