With the world’s eyes on Ukraine, Azerbaijan is taking full advantage : Armenia Focus 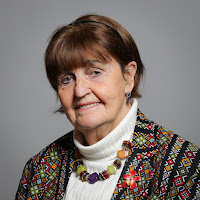 With the world’s eyes on Ukraine, Azerbaijan is taking full advantage
(This is an article written for the House magazine by Baroness Cox  found here at Politics Home.com  where you can read the full article.)
The nature of my work often requires me to enter war zones.
For four decades, I have crossed borders, sometimes illegally, to deliver humanitarian aid and to stand in solidarity with people under fire. One might expect that, after so many years, my heart would 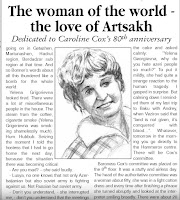 become hardened to such suffering. Yet when the Russian invasion began, my heart broke again. The profound grief of Ukrainians is impossible to fathom.

Each new day, we are exposed to further suffering. More bombs. More killings. More displacement. Column inches are filled with reflections of our collective sense of horror, as we try to process the sheer inhumanity of war and the invasion’s broader geopolitical significance. Yet to date, no attention has been paid to a small but very significant enclave in the South Caucasus, over 1,000 miles away from Ukraine, currently under the protection of Russian troops.
A forgotten enclave

The enclave is called Nagorno Karabakh – known locally as Artsakh. It is an historically-Armenian territory, which Stalin handed to Azerbaijan during his divide-and-rule policy in the 1920s. As Soviet rule collapsed in the late 1980s, a referendum was held with an overwhelming vote for independence. Armenians later established control of Nagorno Karabakh as a de facto independent state, with a functioning government and a viable economy, though its independence was never internationally recognised. 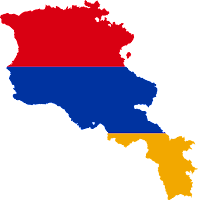 In the early 1990s, Nagorno Karabakh experienced a full-blown war, during which local Armenians fell victim to a horrific campaign of ethnic cleansing. I visited many times during the war to deliver aid, and witnessed Azerbaijani forces firing 400 GRAD missiles every day onto the capital Stepanakert. The war lasted for years, with catastrophic results, until a Russian-brokered ceasefire was agreed in 1994.

The people of Nagorno Karabakh suffered widespread destruction of non-military objects, including medical emergency service centres and ambulances, schools and pre-schools, religious sites, food stocks, crops, livestock, electricity and gas plants, and drinking-water installations and supplies. These are war crimes, horribly reminiscent of what is happening in Ukraine.

The West did nothing to stop the killings and atrocities. On 10 November 2020, it was left to Russia to broker another ceasefire, which brought an end to major hostilities. Russia also sent 2,000 troops to Nagorno Karabakh to enforce the peace agreement, a mission that is due to last until 2025. Their presence is controversial, but deemed essential among many local Armenians to guarantee the survival of their historic land, especially as 80 per cent of Nagorno Karabakh is now occupied by Azerbaijan.

The ceasefire, however, is fragile. Its eighth article commits each state to ‘the exchange of prisoners of war and other detainees.’ Armenia has since returned all Azerbaijani prisoners captured during the 44-Day War. Yet hundreds of Armenians remain in Azerbaijani custody, many of whom are undergoing speedy criminal trials. Some have been filmed or photographed in captivity but with no indication as to their current whereabouts. Tens of others remain vulnerable to killings, torture, indefinite imprisonment or enslavement, with evidence of humiliating treatment and desecration of corpses by Azerbaijani soldiers.

Such allegations are backed up by reputable international human rights organisations and a wealth of information available from different sources, including from my 86th visit to Nagorno Karabakh during the 2020 war, when I wept with a mother who received pictures of her missing son’s dismembered, decapitated body. Serious concerns also remain over the fate of hundreds of Armenian Christian monuments and ancient cultural heritage sites, which are now under Azerbaijan’s control, some of which were shelled or erased during the war – another war crime under international law.
The 2020 invasion was deemed so severe that Genocide Watch issued a ‘Genocide Emergency Alert’. It classified Azerbaijan at Stage 9 (extermination) and Stage 10 (denial) of the ten stages of the genocidal process. The Alert was emphasised by the International Association of Genocide Scholars, who said that “military actions by the Azerbaijani and Turkish leadership should warn us that genocide of the Armenians in Nagorno-Karabakh, and perhaps even Armenia, is a very real possibility… Armenians can face slaughter if any Armenian territory is occupied.”

Since the Russian invasion of Ukraine, there is now a broad and palpable fear that the Nagorno Karabakh ceasefire will not hold. I am told that “Artsakh is on high alert.” This ancient Armenian enclave could be lost, once and for all. And while the world’s eyes turn towards eastern Europe, Azerbaijan is taking full advantage in the South Caucasus.

I receive almost daily reports of Azerbaijani military offensives against Armenian villages. By megaphones and loudspeakers, villagers are ordered to leave their homes. Women and children are evacuated, including recently from Karmir Shuka and Khnushinak in Martuni and Khramort in Askeran, where Azerbaijani forces continue to accumulate military equipment and manpower.

Azerbaijan reportedly cut the gas supply from Armenia to Nagorno Karabakh in early March, exacerbating the already-terrible humanitarian crisis. Over 15,000 people are deprived of gas and therefore deprived of warmth. The pipeline cannot be repaired as Azerbaijani forces threaten any maintenance workers with violence. Azerbaijan also prohibits free passage of the Lachin humanitarian corridor (currently the only road linking Armenia to Nagorno Karabakh), all the while seeking to force Armenia into more concessions and further capitulation agreements.
To read more on this article please visit Politics Home.com and read it in The House
This link should take you to other posts on the plight of Armenians on BaronessCox.com
Credit Link to Women of the World