Hong Kong: National Security Law: Baroness Cox spoke in the House of Lords on the 7th January with Lord Alton about the suppression of the right to protest and the arrest of more than 50 people, including pro-democracy politicians and campaigners, under the national security law in Hong Kong. (AH)
Baroness Cox's spoken question: My Lords, will the Minister tell us what initiatives Her Majesty’s Government are taking to lead efforts to build international co-operation and establish multilateral mechanisms for response, including the establishment of a UN special rapporteur to monitor and report on the human rights situation, as called for by many serving and former UN independent experts last year? 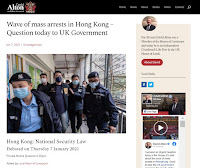 My Lords, my right honourable friend the Foreign Secretary has been at the forefront of strengthening international alliances and action in this respect. I have already alluded to the progress we have made. The noble Baroness is right to raise the important issue of other representation within the context of human rights. I note in particular that the human rights commissioner recently put out a statement on the arrests. We continue to implore China to allow access for the human rights commissioner to China, to ensure that human rights can be respected and the world can see what is being done currently on many minorities within China. Original Source.
You can also read more here on Lord Alton's website.
(AH) Written by Andrew Haigh.