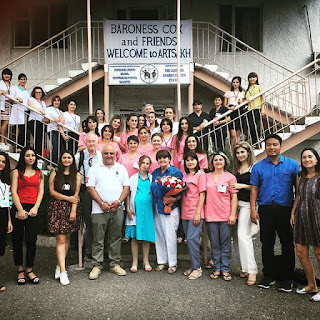 Within a three-day period, all staff and patients of the Lady Cox Rehabilitation Centre were forced to evacuate.

In the midst of the conflict in Nagorno Karabakh (Artsakh) lies a profound symbol of hope – The Lady Cox Rehabilitation Centre – an internationally recognised ‘Centre of Excellence.’ Founded in 1998, following the end of the Nagorno Karabakh war, the Centre has 73 staff and annually treats approximately 160 inpatients and 384 outpatients. Staff make approximately 155 home visits per year to patients in the region. In 2018, the Centre provided 12,889 physical therapy sessions, 4,284 psychologist sessions, 3,166 speech therapy sessions and 2,302 hydrotherapy sessions. Its inspirational staff, led by the Centre’s Founder and Director Vardan Tadevosyan, have helped to break the stigma of disability which was widespread throughout the former Soviet Union.
Please read more about this here....