It is impossible to overstate the significance of the large scale aggression against Nagorno Karabakh by Azerbaijan and the extreme danger presented to the whole region by this escalation. Nagorno Karabakh/Artsakh has been an autonomous region since 1991, is 94% Armenian Christian, and has been seeking self-determination for decades. There has been a history of ethnic cleansing in Nagorno Karabakh against the Armenian population, and widespread teaching of Armenophobia and hate-speech in Azerbaijani educational and political discourse. 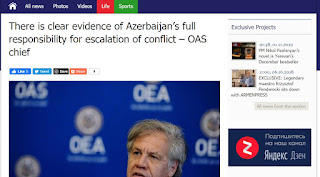 The Secretary General of the Organisation of American States (OAS), Luis Amalgro, stated today in a letter to the Azerbaijani Ambassador in the USA that the unilateral arms race that has taken place in Azerbaijan in the last five years, shows clear evidence of Azerbaijan’s full responsibility for this escalation.(1)

On 3rd October, fierce battles are continuing. Artsakh’s Presdient Arayik Harutyunyan made a strong patriotic live appeal to the nation, including the Diaspora for everyone to mobilise for a life and death struggle against never ending attacks by Azeri-Turkish offensive. He has appealed to the international community to do all they can to stop the war of Turkey and Baku and their Jihadi terrorists against the Armenian people. There was also an International Armenian call to prayer.

Given the strength of Azerbaijani and Turkish forces and their intentions, any resumption of discussion without an immediate cessation of hostilities could be too late for tens of thousands of civilians and for the people of Armenia.

Of particular concern at the present time are the following facts: 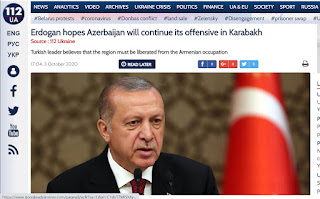 During a live call on 2nd October with the Nagorno Karabakh Foreign Ministry in Stepanakert which was interrupted by an air-raid warning, the representative told us:

“We are actively being attacked by artillery and drones… a couple of missiles have fallen on different parts of the capital Stepanakert. We don’t know the casualties yet. The fighting is fierce on the line of contact and it continues. They are heavily bombarding regional areas by air and missile launchers. They are using Smirch missiles into civilian areas – an overt violation of international humanitarian law and Geneva conventions. Journalists were wounded yesterday in Martouneh centre. They were nowhere near the frontlines. They were in the centre of the city interviewing civilians…”

And on 1st October a friend in Stepanakert wrote to us the following:

They are targeting, civilians, women and children, elderly the helpless. Armenians of Artsakh have once again returned to their basements for shelter from missiles coming from Azerbaijan.

Today is the fourth day of war, cities, towns villages have stopped their normal day to day life and gone to war conditions. On the hearing of the siren they flee to find protection where ever possible. Children crying, upset, frightened, elderly struggling to hold back tears. Tears which bring back the memories of the first war in 1991, the April war in 2016 and now September 2020.

We are 3 million against 10 million but our fearless soldiers stand strong, full of pride, filled with courage ready to fight for what is ours and will remain ours. God bless our men, husband, fathers, sons, boys, we pray for their safe return with victory. World leaders, powers wake up, see what is happening. Now, make a stand, speak up. Azerbaijan and Turkey have to be punished for what they are doing.”

On 29 September, Security Council members expressed concern over reports of large scale military actions along the Line of Contact in the Nagorno-Karabakh conflict zone. and strongly condemned the use of force and regret the loss of life and the toll on the civilian population. Security Council members voiced support for the call by the Secretary General on all sides to immediately stop fighting, de-escalate tensions and return to meaningful negotiations without delay. Security Council members expressed their full support for the central role of the OSCE Minsk Group Co-Chairs and urged the sides to work closely with them for an urgent resumption of dialogue without preconditions.

We therefore urge the British government: