Baroness Caroline Cox visit to European Parliament Genocide of Armenians in Baku, Sumgait and Artsakh must be recognized

Catching up with Caroline can be a challenge as she is in great demand around the globe. As you know Lady Cox is also CEO of the Humanitarian Aid Relief Trust (HART), Lady Cox is also the founder of the Lady Cox rehabilitation Center which provides much needed care for the disabled in Nagorno-Karabakh.

During the 1920s the Nagorno-Karabakh region was assigned to Azerbaijan by Stalin. Armenians and Azerbaijanis lived together relatively peacefully until conflict broke out in 1988, as the USSR was dissolving. The conflict included the attempted ethnic cleansing of the Armenian population of the region. In May 1994 a ceasefire was brokered, but a formal peace treaty has never been agreed.
Efforts to foster a lasting peace, including greater international engagement, increased dialogue and confidence-building measures, are urgently needed.


This article below was taken from Radio Public of Armenia and written by Siranush Ghazanchyan and covers the importance of her trip. I have included pictures and other accompanying content.

The keynote speakers were the British humanitarian, Life Peer and former deputy speaker of the House of Lords the Baroness Caroline Cox and eye-witnesses Anna Astvatsaturian Turcotte, an American-Armenian author and human rights advocate as well as David Babaev, a lecturer at “Université Libre de Bruxelles”. The latter are both survivors of the Baku pogroms.

Members of the European Parliament, EP advisers, students, representatives of the civil society and missions of various EU member states as well as Belgian citizens who are survivors of Baku pogroms, were present.

In his opening remark, the EAFJD President Kaspar Karampetian welcomed the participants and emphasized the importance of addressing the issue of the anti-Armenian pogroms, in particular in the premises of the house of European democracy. “In its resolutions of 1990 the European Parliament unequivocally condemned the pogroms perpetrated against the Armenians by the Azerbaijani authorities, namely in Sumgait, Kirovabad and Baku,” stated Karampetian.

MEP Costas Mavrides announced that he had decided to host the event, among other reasons, because of his own experience as a child who had to flee for his life after the Turkish invasion in Northern Cyprus in 1974. He emphasized: “Remembrance is not about revenge but forgetting is unforgivable because it would lead us to the same crimes”.

His Excellency the Ambassador of Armenia Tatoul Markarian reminded that the anti-Armenian massacres in Azerbaijan were the first mass killings and ethnic cleansings in the post-Cold War Europe.

During their testimonies, Ms. Astvatsaturian Turcotte and Mr. Babaev shared their personal stories and what they witnessed as refugees fleeing Baku. “We spent months hiding in our apartment, hoping that the violence against Armenians would end. But it never ended. We left everything behind and fled. We barely escaped but we survived. Many of our neighbors and family friends were not so lucky”, said Astvatsaturian Turcotte.

Babaev underlined that the killings and pogroms in Sumgait and Baku had not come from nowhere and the ground was already fertile. He noted: “These atrocities: violence, intimidation, rape, murder and burning people alive should not stay unpunished.” 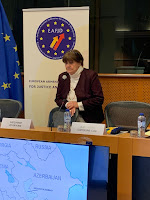 The Baroness Caroline Cox pointed out that the genocide of Armenians continued in Baku, Sumgait and Nagorno Karabakh-Artsakh and needs to be recognized so that it does not continue with impunity.

The guest speakers stressed that the Azerbaijani authorities still systematically incite and perpetuate Armenophobia as a state policy in Azerbaijan, a policy witnessed by the victims of Baku pogroms. They concluded by acknowledging the important role of the European Union as a soft power promoting dialog, peace and human rights.

The speeches were followed by a lively question and answer session, where the guest-speakers addressed the questions asked among others by Azerbaijani participants.

You can read more from the source of this article through this link  students who also took part in the conference were given a chance to address questions to keynote-speakers Baroness Caroline Cox & eyewitnesses Anna Astvatsaturian Turcotte and David Babaev. Here are some quotes placed on Twitter after the event - 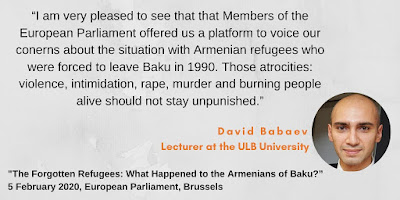 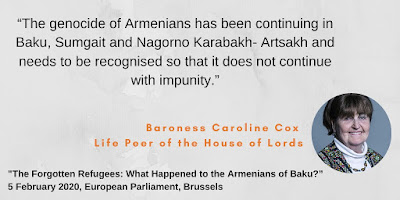 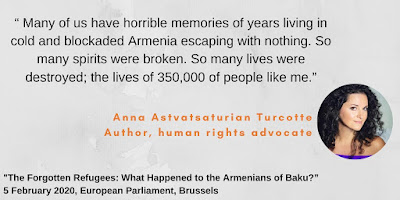 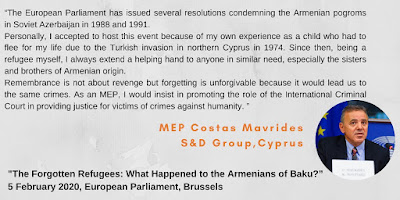