On Wednesday 22 January, just after 7am, nomadic Misseriya herders attacked the Dinka village of Kolom in the disputed Abyei region on the Sudan-South Sudan border.

The herders arrived on tuk-tuks and motorbikes, armed with assault rifles and two RPG-7s. They killed 32 villagers and abducted 15 children, aged between 2 and 12. They also burned 22 tukuls (homes) and destroyed the local church and clinic.

Baroness Cox visited the village just hours after the attack. Many homes were still burning as she witnessed the digging of mass graves for the charred and mutilated bodies.

Survivors shared with her the following testimonies:

“Six of our elders spoke with the UN on Tuesday night to warn them about an imminent attack by the Arab militants. The next day, all six of the elders were killed. Why didn’t the UN protect us?”


“We feared an attack at any moment, so we asked the local UN peacekeepers whether we should hide in the bush. But they told us not to worry and to stay in our homes. The UN left at 6:10am and the attack happened an hour later. The peacekeepers failed to protect us.” 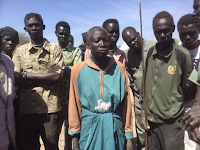 “There have been other similar attacks [by Misseriya herders against civilian farmers] but this massacre was on a far greater scale. It is horrific. We are heartbroken. They burn our homes to occupy our land. We have never known anything like it.”

“If the UN will not protect us, then we must defend ourselves. Perpetrators must be brought to justice, otherwise there is a risk of retaliation. We are full of fear that there will be more violence and more deaths.”

“The scale of suffering and depth of grief is altogether overwhelming. Local people feel abandoned. They are indignant at the failure of so-called peacekeepers to provide adequate protection."

In a statement, she added:

“Survivors told me that they wanted to flee to the bush for safety. Yet they were urged by the UN not to take this course of action. Will the UN confirm and explain this? And given that UN forces are mandated to protect civilians in Abyei, why did peacekeepers fail to provide 24-hour protection to the villagers when they knew Misseriya fighters were nearby and preparing an attack?

"The UN must launch a full investigation into the massacre, sharing immediately any findings with the entire community – otherwise there will be no confidence.

“The crisis facing civilians here is already so complex and delicate. Unless the UN steps up its efforts to provide the security required – as a matter of urgency – the conflict will almost certainly spiral out of control.”

Baroness (Caroline) Cox is an independent member of the UK House of Lords.


As Founder and CEO of Humanitarian Aid Relief Trust (HART), she was already in South Sudan when the attack took place. 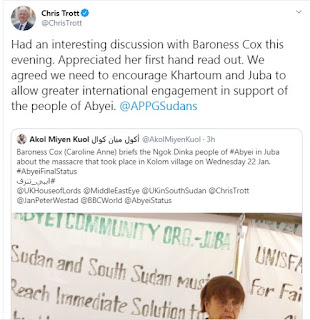 The village of Kolomis located in the disputed Abyei region on the Sudan-South Sudan border. Before the attack, Kolom had a population of 1,000 people, with 50 households.

His Excellency Chris Trott said "Had an interesting discussion with Baroness Cox this evening. Appreciated her first hand read out. We agreed we need to encourage Khartoum and Juba to allow greater international engagement in support of the people of Abyei."