Baroness Cox of Queensbury; Fired With Passion For Human Rights 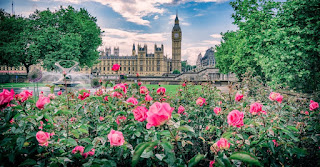 Baroness Cox of Queensbury; Fired With Passion For Human Rights

Listen: Baroness Cox of Queensbury in conversation with Stephen O’Doherty.

Caroline Cox qualified as a nurse, graduated as a social scientist and in 1982 was made a life peer. Baroness Caroline Cox of Queensbury is a Christian, and sits in the House of Lords. She is also a passionate advocate for human rights and the rights of women especially.

She is the founder of the Humanitarian AId Relief Trust (HART) and is actively engaged with their work around the world in Africa, Eastern Europe and in Timor Leste.
Timor Leste malnutrition

On a recent visit to Australia, Baroness Caroline Cox spoke about her work with Open House. On her way, the energetic Baroness also visited a HART Australasia project in Timor Leste which is working with a local partner to address the severe childhood malnutrition problems in the country.

This is a great radio interview recorded Thursday, August 16th, 2018 and copy kindly sent to Caroline whilst she was on her travels in Australia by Dr. Joseph Dsouza . This interview conducted by Vision Christian Radio  is one of the best ones I have come across for some time and I would encourage you to listen to it via the links provided. (Andrew Haigh)

“It was quite a shock.”
Baroness Caroline Cox is CEO and Founder of the Humanitarian Aid Relief Trust and a long time fighter for the freedoms of Western society now under threat.

We have to keep a constant watch to protect our political, cultural, and spiritual heritage. 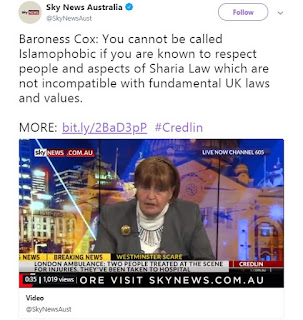 A cross-bench member of the British House of Lords has introduced a private member's bill to protect Muslim women in Britain from Sharia Law. Baroness Caroline Cox told Sky News she believes in the freedom of religion, but says elements of the practice are incompatible with fundamental UK laws and values.

As many of her friends know Baroness Cox is currently away supporting the local Partners for her charity work Humanitarian Aid Relief Trust (HART). Whilst away she had an opportunity to speak out for Muslim Woman world-wide for an interview with Sky News Australia.

We were overwhelmed by the positive support across social media and for all those that shared the link of her interview. Here is a selection of pictures and the link to her news interview. 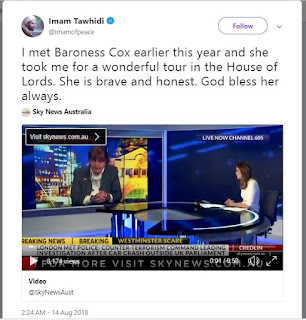 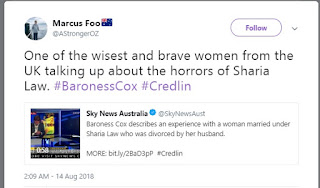 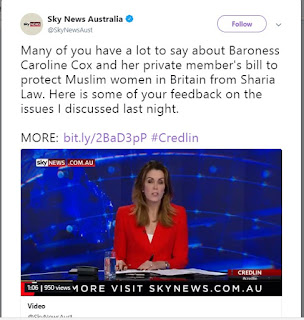 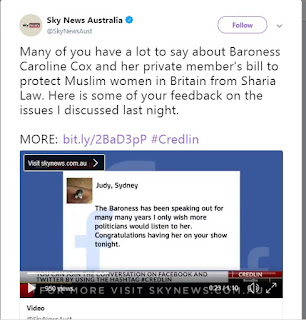 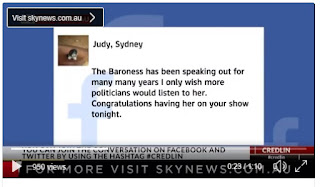 ‘Our suffragettes would be turning in their graves’: Baroness fights against Islamic law

A British parliamentarian is speaking out against sharia, saying the practices would make suffragettes “turn in their graves”.

“Here’s a lady we need to listen to,” says Alan Jones.
Read more »
No comments: