A British delegation of clergymen, parliamentarians, journalists and academics visited Syria last week, arriving in the region during the missile attacks by the USA, the UK and France.

They visited Syria at the invitation of Ignatius Aphrem, the Syriac Patriach, and met Christian and Muslim religious leaders, the Speaker of Parliament, MPs from many parts of Syria and opposition MPs, internationally-respected artists, musicians and intellectuals, the humanitarian aid organisation St Ephemeral Patriarchal Development Committee (EPDC) and members of local communities in Damascus, Saidnaya, Maaloula, Homs and Aleppo.


Key issues raised by Syrians:
· Airstrikes: Everyone whom the group met expressed deep anger at the recent missile attacks by the USA, the UK and France, claiming the attacks were illegal (no mandate and not a threat to their countries); the missiles were fired a day before chemical weapons experts were due to visit the scene of the alleged attack; the lack of substantial evidence (Journalist Robert Fisk has since visited and found no corroborative evidence).

· Regime change: Despite the well-documented criticisms of the Syrian Government, many Syrians are deeply concerned by the British Government’s commitment to impose a transition of power, including the removal of President Assad. All those whom the group met passionately believe that, as there is no remaining ‘moderate’ armed opposition, regime change would create a disaster comparable to those in Iraq and Libya.

· UK Govt support for Islamist-related groups: The UK Government has provided massive financial support to so-called ‘moderate’ opposition forces associated with jihadist militants. The vast majority of opposition forces have extremist ideologies, with no intention of creating democracy in Syria. This is only prolonging the war and the suffering of the Syrian people.

· Sanctions: There is widespread concern over the devastating impact of sanctions and the destruction of industrial infrastructure. These greatly harm civilians, for whom it is very difficult to obtain employment, and adequate supplies of food, medicines and medical equipment.

Three Christian Patriarchs in Syria issued a joint statement after the missile attacks:

“This brutal aggression is a clear violation of the international laws and the UN Charter, because it is an unjustified assault on a sovereign country… [the missile attack] encourages the terrorist organisations and gives them momentum to continue in their terrorism.”

Baroness Cox, a member of the delegation, said:

“Everyone we met expressed deep sadness and anger at the devastating impact of British foreign policy, including the recent airstrikes by the USA, the UK and France. It is fundamentally wrong to inflict missile strikes related to alleged chemical warfare before unequivocal evidence is known and publicised.

“There is also a real fear that the response by the USA, UK and France may encourage jihadists to initiate another chemical weapons incident in order to stimulate an even more ferocious response against the Syrian Government and Army.

“Syrians should have the right to determine their own future and to elect their own leadership, without foreign interference.”

Here are three pictures from Homs - 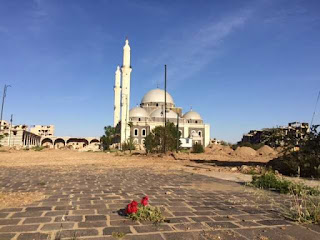 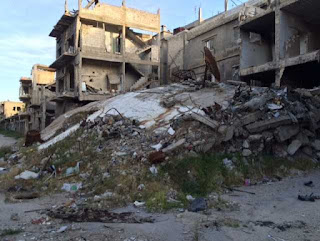 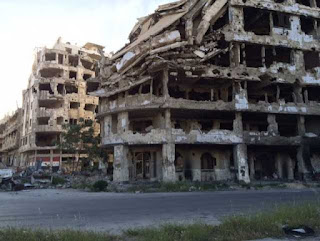