A statement from Caroline on her latest visit to Syria 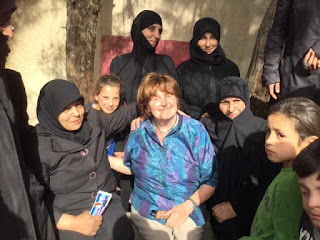 Earlier this month, I visited Syria at the invitation of the Syriac Orthodox Patriarch. The visit provided an opportunity to meet Christian and Muslim religious leaders, the Speaker of Parliament, MPs from many parts of Syria and opposition MPs, artists, musicians and intellectuals and members of local communities in Damascus, Saidnaya, Maaloula, Homs and Aleppo.

The visit also provided an opportunity to establish a relationship with the humanitarian aid organisation St. Ephrem Patriarchal Development Committee (EPDC) to initiate a programme helping women to develop entrepreneurial activities in the Christian town of Maaloula, which had been invaded by Jihadists who perpetrated atrocities, including killing three men who refused to convert to Islam, desecrating holy places and destroying many people’s homes. The project will help these women, who had lost everything, to rebuild their lives and to support their families.


The visit received mixed media coverage in the UK, with some claiming it gave legitimacy to the Assad regime. This, clearly, is a misrepresentation of our position. I have never condoned violations of human rights by President Assad and his Government. However, everyone whom we met feels passionately that the alternative – enforced regime change – would be far worse. As there is no moderate armed opposition left, regime change would lead to tragic consequences, similar to Iraq and Libya. I have therefore been very critical of our Government’s policy and my criticisms have been supported by many people, including three former British Ambassadors to Syria. I have also raised deep concerns about the recent missile attacks by the USA, UK and France – concerns which have been endorsed by many colleagues in the House of Lords.

The Syrian people have suffered terribly during the war. At HART, it has always been our mandate to support local partners to provide aid and advocacy for those suffering oppression and persecution. We will continue to listen to their concerns, respond to their needs and seek to convey their priorities – and, where we deem it necessary in the interests of truth and justice, to challenge our Government’s policies – as we have done regarding the situation in Sudan.

I will be pleased to make available further information, including contributions in the House of Lords, our Press Release and our report if you would like to receive them.

Please read the latest report on Syria by Baroness Cox