It has now been five years since first launching this website for my dear friend, Baroness Cox.

It all started when being treated by Caroline to tea cakes in the House of Lords in 2016 with my daughter. We asked with so many staff and helpers why haven’t you got your own website and social media?

Caroline replied, “I don’t know. There was someone who once tried to put up a website.” My daughter said my dad will sort this out for you. I’ve done so voluntarily now for five years since launching the website in 2017 and also the Twitter. I set up Baroness Cox News Twitter in October 2020. 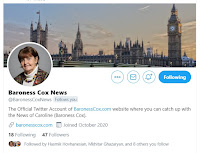 Thanks to you, the website has been now read all over the globe by over 140,000 readers and twitter tweets for Caroline, seen by the tens of thousands each month. It delighted Caroline at the amount of followers growing each month. Small beginnings perhaps, but with the many supporters of Caroline around the globe, we grow monthly in a positive direction.

It has also thrilled Caroline to see the many kind comments on this website left by her supporters and the supportive tweets on Twitter.

Over the coming months, the website is being refurbished and highlighting some of the many charities Caroline supports and is part of you can find the revised list here -