Baroness Cox cross party bicameral letter to the Foreign Secretary about the deteriorating security situation in Nagorno Karabakh which has become critical. 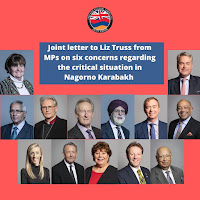 Baroness Cox has supported the Armenian people since the early 1990's and bases her extensive first hand knowledge on having visited Armenia over 85 times to my knowledge. Below is the latest cross party bicameral letter to the Foreign Secretary about the deteriorating security situation in Nagorno Karabakh which has become critical. The letter sets out six urgent concerns, all of which should be urgently addressed.
The Rt Hon Elizabeth Truss MP Secretary of State for Foreign, Commonwealth and Development Affairs

The security situation in Nagorno Karabakh is now critical. We have six urgent concerns, all of which require an immediate and meaningful response. 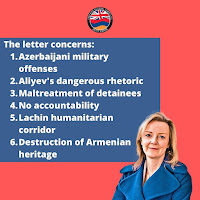 1) Azerbaijani military offensives
Escalating numbers of Armenian villagers are threatened and ordered to leave their homes. As recently as 3 August, Azerbaijani Armed Forces reportedly used drones, grenade launchers and anti-aircraft weapons along the north-western border of the Line of Contact. Two Armenian soldiers were killed and 19 others injured. The attack follows similar Azerbaijani military offensives in the direction of Parukh, Hin Tagher and Khtsaberd villages. These are blatant and recurring breaches of the 2020 ceasefire agreement, which commits each party to “stop at their current positions.”
2) Dangerous rhetoric
Recent military offensives by Azerbaijan are a practical outworking of President Aliyev’s avowed commitment to take “timely steps”, “liberate lands” and “crush the enemy’s head”. During his victory speech after the 44-Day War in 2020, he claimed that territories beyond Nagorno Karabakh – including Armenia’s capital Yerevan – “are our historical lands” and belong to Azerbaijan. He made similar claims in 2013, 2014, 2016 and 2018, promising the return of these territories to Azerbaijan. The UK Government has made no attempt to condemn such provocative rhetoric, nor have OSCE Minsk Group initiatives resulted in a cessation of hostilities. 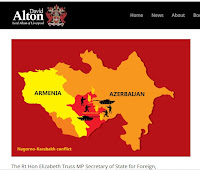 3) Maltreatment of detainees
Armenia has returned all Azerbaijani prisoners captured during the 44-Day War. Yet many Armenians remain in Azerbaijani custody, a significant proportion of whom are undergoing speedy criminal trials. Some have been filmed or photographed in captivity but with no indication as to their current whereabouts. Tens of others remain vulnerable to killings, torture, indefinite imprisonment or enslavement, with widespread evidence of humiliating treatment and desecration of corpses by Azerbaijani soldiers – a war crime and a further breach of the ceasefire agreement, which commits each party to “the exchange of prisoners of war and other detainees.”
4) No accountability
During the 44-Day War, civilians in Nagorno Karabakh endured almost-daily military offensives by tanks, helicopters, cluster munitions and Smerch multiple rocket launchers – weapons incapable of precision targeting – in breach of international humanitarian law and Geneva conventions. Civilians also suffered widespread destruction of non-military objects, including medical emergency service centres and ambulances, schools and pre-schools, religious sites, food stocks, crops, livestock, electricity and gas plants, and drinking-water installations and supplies. These are war crimes, horribly reminiscent of what is happening in Ukraine. 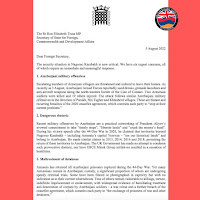 5) Lachin humanitarian corridor
We continue to receive reports that Azerbaijan prohibits free passage of the Lachin humanitarian corridor (currently the only road linking Armenia to Nagorno Karabakh), all the while seeking to force Armenia into more concessions and further capitulation agreements. Any plans by Azerbaijan to construct a new route along the Lachin corridor must be approved by Armenia, as per the ceasefire agreement.
6) Destruction of Armenian heritage
Serious concerns remain over the fate of hundreds of Armenian Christian monuments and ancient cultural heritage sites, which are now under Azerbaijan’s control – some of which were shelled or erased during the 44-Day War. The sites include 161 churches, the ancient city of Tigranakert, Azokh Paleolithic Cave and the Nor Karmiravan tombs. UNESCO is denied access to the sites by Azerbaijan. 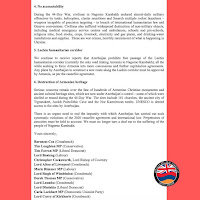 Please also search my website for more on Armenia and feel free to leave comments below.
Please also read -  Baroness Cox warning of the ethnic cleansing of Armenians during the Ukraine crisis