Baroness Cox: The Rise of Global Christian Persecution: Where do we go from here? 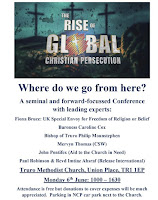 The Rise of Global Christian Persecution:
Where do we go from here?

On the 6th June, Baroness Cox attended and spoke at the Truro Conference at Truro Methodist Church, other speakers, Bishop Philip Mounstephen, Mervyn Thomas (CSW), John Pontifex (Aid to the Church in Need), Paul Robinson and Revd Imtiaz Ahsraf (Release International) and Fiona Bruce, UK Special Envoy for Freedom of Religion or Belief also part in a conference discussing The Rise of Global Christian Persecution: Where do we go from here?
This is not the first time that Baroness Caroline Cox has attended this important conference, and I know she looks forward to it every time. Over nearly seven years it has been my* privilege to work with my good friend Baroness Cox and be of help to her at the House of Lords since my stroke in 2015, although most times it is more like Caroline is helping me when we are there. One thing I can attest to is that Caroline dedicates herself to shining a light on the hidden truths that may not get media attention and she works tirelessly to bring those truths to light. What makes Baroness Cox unique is that she actually goes and visits places of conflict around the world to see for herself those suffering oppression, persecution, and in need of humanitarian aid. (AH)
Baroness Caroline Cox says between 13,000 and 19,000 Nigerians have been killed since 2009, many for their faith. She writes: “The violence appears designed to reduce the number of Christians in the region. The attacks… may rise to the level of ethnic cleansing or even genocide.” 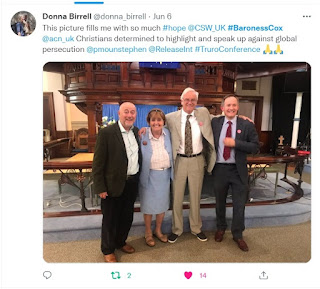 The conference is best summed up by the tweet from Donna Birrell Multimedia journalist
@PremierRadio Trustee of Transformation Cornwall @TCwll and vice-chair of Churches Together Cornwall
@donna_birrell Said: This picture fills me with so much #hope @CSW_UK #BaronessCox @acn_uk Christians determined to highlight and speak up against global persecution @pmounstephen @ReleaseInt #TruroConference

The best description of the conference can e found in the words of -
Dr Russell Blacker as he writes:

Some of you will remember attending our three previous conferences in Truro Methodist Church on the big issue of the persecution – and, now, genocide – of our fellow Christians around the world. Over 340 million Christians now live in countries where they experience severe or very severe persecution.

The Lord did warn us that this would happen and of course there is a mandate that the Body of Christ does all it can to support and help our brothers and sisters who are paying the ultimate price for their faith. This is all the more necessary because Christian minorities are usually bypassed by Western Governments (including our own), and multilateral Aid Organisations, and the Media. They therefore rely heavily on the smaller faith-based NGOs donations to whom are only a fraction of that given to more popular charities.

The already appalling statistics on those attacked, displaced, abducted, raped and forcibly married, as well as imprisoned, tortured and killed merely because they believe in the Lord Jesus have continued to climb year on year. We have therefore called this conference for two reasons:

(1) The first is to examine Where do we go from here? We are thrilled to have been able to assemble a distinguished panel of the UK’s leading experts – to discuss whether we could do more, and What, and to review what actions are found to be effective and ineffective – as well as considering whether the agenda needs to be widened? The conference will therefore examine the spiritual dimension alongside practical and political matters.

(2) The second reason is to help the main constituency – Christian believers – to understand what is happening and why – and to equip us all to realise that there is a great deal each of us can do to ‘assist and resist’ – through prayer and dedicated prayer groups, through consciousness-raising, political and media lobbying, and donations and fund-raising for the faith-based NGOs who are often the only source of support to the victims.
Andrew Boyd from Release International has been speaking to Premier about the event :