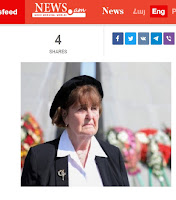 Armenia News reported: Baroness Cox says she came to Armenian Genocide Memorial in anger because UK has not recognized this tragedy

YEREVAN. – Baroness Caroline Cox, a great friend of Armenia and the Armenian people, a member of the British House of Lords and its former vice-speaker, visited the Armenian Genocide Memorial in Yerevan on Saturday, on the 106th anniversary of this tragedy.

After laying flowers at the eternal flame commemorating the victims of the Genocide, Baroness Cox addressed a message, the National Assembly of Armenia informed Armenian News-NEWS.am. 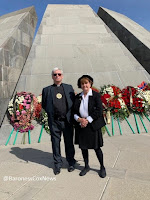 The Baroness noted that she came to the memorial outraged because they are pushing for the UK government to recognize the Armenian Genocide, one of the UK-member countries, Wales, has recognized it, there is even a respective statue in the Welsh capital Cardiff, but the UK government has not recognized it yet, and they are fight for it.
Picture left is the Rev David Thomas with Baroness Caroline Cox; David has worked tirelessly with Caroline for many years with her advocacy and humanitarian works.
Please read the rest of this important article here -
Please feel free to leave comments on our posts below -