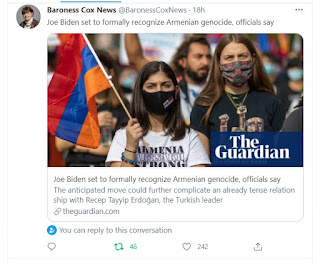 Residents of Armenian descent will gather at the Armenian Genocide Memorial on Saturday 24th of April at 10 a.m. for their annual remembrance of the roughly 1.5 million Armenians who were killed just over a century ago, but this year the gathering will occur as President Biden reportedly plans to become the first American president to officially recognize the genocide,
In a recent article back in December 2020 by the Armenian Public Radio Baroness Cox said this about the Armenian Genocide:

“In the genocide unleased against the Armenians more than a 100 years ago by the Ottoman Empire, an estimated 1.5 million Middle Eastern Christians—including Armenians, Greeks, Assyrians, Chaldeans, Syriacs, Arameans and Maronites —perished between 1915 and 1923. This genocide has received recognition by many countries, including Wales—all credit to Wales—but not the United Kingdom. At the time, the world was indifferent, which led Hitler, on 22 August 1939, infamously to say, “Who, after all, speaks today of the annihilation of the Armenians?” Hitler considered the Armenian “solution” a precedent for his atrocities against the Jews. We know all too well what that meant,” Caroline Cox stated. (1)

Caroline as many of us know has visited Armenia over eighty times over the years and seen for herself first-hand the atrocities over the past thirty years against the Armenian people, a people that she holds dear in her heart and has advocated and provided aid.

Caroline also established the Lady Cox Rehabilitation Centre which initially helped tread those who were injured during the conflict in the 1990's, the rehabilitation centre has grown over the watchful eye and skill of Vardan Tadevosyan who is the director of the Rehabilitation Centre in Stepanakert, the capital of Nagorno-Karabakh. Vardan and his team now treat thousands of men, women, and children with disabilities a link above.
I have had the privilege to work with and help Caroline now for nearly six years and there has not been a single week gone by that she has not spoken of her passion and pride to help the Armenian people. My Christmas present from Caroline was a wonderful set of table mats made in Armenia with traditional Armenian artwork. Here is the latest attempt of Caroline to encourage the recognition of the Armenian Genocide (AH) 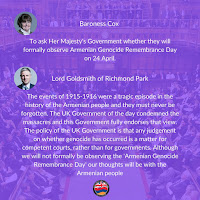 The events of 1915-1916 were a tragic episode in the history of the Armenian people and they must never be forgotten. The UK Government of the day condemned the massacres and this Government fully endorses that view. The policy of the UK Government is that any judgement on whether genocide has occurred is a matter for competent courts, rather than for governments. Although we will not formally be observing the 'Armenian Genocide Remembrance Day' our thoughts will be with the Armenian people
Credits:  Original source UIN HL14566 (1) Public Radio of Armenia article 2020
Link to Guardian article (AH) Post written by Andrew Haigh.
Feel free to leave comments!