Myanmar needs our prayers and robust action by world leaders 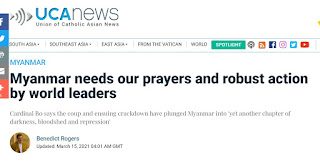 Myanmar needs our prayers and robust action by world leaders

Cardinal Bo says the coup and ensuing crackdown have plunged Myanmar into 'yet another chapter of darkness, bloodshed and repression'

March 14 was the Global Day of Prayer for Myanmar — or Burma, as so many in the democracy movement and the ethnic nationalities still prefer.

This is an annual event initiated 25 years ago by David Eubank, an American evangelical missionary, human rights activist and humanitarian relief worker who founded and leads the Free Burma Rangers. In 1996, he met Aung San Suu Kyi in Yangon, and she told him that she reads the Bible regularly and that her favorite verse is John 8:3: “You will know the truth and the truth will set you free.” She asked him to pray for the country. A quarter of a century on, those words — and that call for prayer for Myanmar — have never been more needed.

Today, the international human rights organization CSW is hosting an online prayer event at which the speakers will be Myanmar’s Cardinal Charles Bo, British Catholic parliamentarian Lord Alton and his fellow legislator Baroness Cox, David Eubank and Dr. Sasa, the international envoy of the body of elected members of parliament in Myanmar, known as the Committee Representing Pyidaungsu Hluttaw (CRPH).

Pastor Roy Chan, founder of Hong Kong’s Good Neighbour North District Church, who assisted many of Hong Kong’s protesters in 2019, will also lead a prayer, illustrating the growing solidarity between the two movements.

In his powerful video message, Cardinal Bo says that the Feb. 1 coup and the ensuing crackdown have plunged Myanmar into “yet another chapter of darkness, bloodshed and repression.” A “decade of reform and opening,” albeit one which included “many challenges and storm clouds,” has been replaced by a return to “the nightmare of military repression, brutality, violence and dictatorship.”

Cardinal Bo praises “the amazing courage, commitment and creativity of our people, demonstrating throughout the country in their thousands for many days.”

He adds: “They have shown their determination not to allow their hard-won democracy and freedoms, their hopes of peace, to be stolen from them. It was a beautiful sight to see and a great inspiration. The sense of unity and solidarity in diversity — with people of different ethnicities and religions coming together for the same cause — was remarkable. But that was met with bullets, beatings, bloodshed and grief. So many have been killed or wounded in our streets, and so many thousands have been arrested and disappeared.”
Please click here to visit and read the rest of this article.