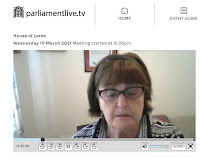 Baroness Cox oral question on the Use of force by the Myanmar military against protesters in that country, Myanmar: Question: 12:39:00
(You can use Google Translate on our desktop website, feel free to comment at the end.)
Baroness Cox:

To ask Her Majesty’s Government what assessment they have made of the use of force by the Myanmar military against protesters in that country.

My Lords, we are deeply concerned by the ongoing use of force against peaceful protesters. The situation in Myanmar has deteriorated significantly over the last few weeks and we have been clear, including through the G7 and the UN Security Council, that the violent crackdown must end. I am sure I speak for all in your Lordships’ House when I say that our thoughts go to all those families and people who have lost their lives—and their wives—protesting against this coup.

My Lords, I greatly appreciate the Minister’s condemnation of the military’s reign of terror, which includes the imprisonment of democratically elected political leaders and the shooting of civilian protesters. Does he agree with Burma’s newly appointed special envoy to the United Nations, Dr Sasa, that the crisis is now so severe that it requires a much more robust response from the UK? Will Her Majesty’s Government therefore urge the UN Secretary-General to initiate an immediate Security Council visit to Burma, and to galvanise international pressure on the military leaders to reinstate the democratically elected Government?

My Lords, I assure the noble Baroness that at the UN, during both our presidency and the current US presidency, we have already convened meetings. A statement has yet to be agreed, but the focus of the Security Council is very much on the situation on the ground. The noble Baroness mentioned Dr Sasa, who is well known in this country; he will always be an important voice. A mission to Myanmar would be a decision for the SG, but of course we are working closely with his office.

My Lords, the Burma Campaign UK, in which I declare an interest as a board member, is receiving increasingly desperate calls from the brave activists in Burma who do not understand why there is not more concerted international action. Does the Minister agree that if the UK Government formally supported the Gambia in its ICJ case against Myanmar, it would be a strong signal that we are not ignoring the awful events unfolding in Burma and that there is no impunity for the crimes of the Tatmadaw?

My Lords, on the noble Baroness’s substantive point about the ICJ, we are reviewing the situation. We are supportive of the action of the Gambia and looking at interventions where they will best serve the purpose of the people of Myanmar. On international action, we have secured two G7 statements and are working through the UN Security Council and with partners such as the US and Canada, as well as those in the region, to ensure that there is international condemnation and that the focus continues.

My Lords, what action are the Government taking with our allies, especially the EU and the Five Eyes, to place effective sanctions on those running military companies that are still doing business with the military in Myanmar?

My Lords, I assure the noble Baroness that we are working closely with our allies. She will have noticed the nine individuals who have been sanctioned recently, in addition to the 16 who already were. She makes a very valid point about the companies, particularly those linked to the military. We are focused on that and future sanctions policy will be part of that consideration.

My Lords, several diplomats from Myanmar are now making the brave choice to speak out against the violence. Can my noble friend the Minister tell the House what status and protection is awarded to these diplomats, and what the Government’s position is on CDC’s investments in the country?

My Lords, on my noble friend’s second point, we are currently reviewing all our trade because of the situation on the ground in Myanmar, and certainly not continuing it until such time as we see democracy restored. On the point about the ambassadors and others, at the UN and here in the UK, I stand for their courage and bravery—I am sure I speak for everyone in your Lordships’ House in that. They continue to represent the people of Myanmar in this country and elsewhere.

My Lords, I declare an interest as vice-chair of the All-Party Parliamentary Group on Democracy in Burma. Can I return the Minister for a moment to the question from my noble friend Lady Cox, specifically calling for a high-level United Nations Secretary-General-led visit to the region and ask whether he will press that? On the question by the noble Lord, Lord Sarfraz, will the Minister look particularly at the nonrecognition of the credentials of the junta’s appointees to the United Nations and to the Court of St James in the United Kingdom?

My Lords, on the noble Lord’s second point, I have already said that the current ambassador to the UN and the ambassador to the Court of St James continue to be the representatives of Myanmar in this country and at the UN. On the high-level visit, as I have said before, we are working through the Security Council and I will update noble Lords accordingly.

My Lords, on the noble Lord’s second point, I have already spoken of the sanctions that we have taken against military individuals. We are looking at companies specifically to target those with military links within Myanmar itself, and advising British business appropriately. On building international coalitions, I believe I have already answered that question, but we are also strengthening our alliances, including at the Human Rights Council.

My Lords, while the whole world’s attention is drawn to the clashes between the military junta and the pro-democracy protesters in Myanmar, what is our Government’s latest assessment of the safety and security of the ethnic Rohingya community, which has suffered genocide and forced migration during the previous military rule in Myanmar?

The noble Lord is quite right to draw the House’s attention to the situation and the continuing challenges, including the discrimination towards and persecution of the Rohingya community within Myanmar and the suffering that continues, including for those who have managed to escape to Bangladesh. The support we offer them is a key priority for us and we continue to work with international authorities for their safe and voluntary return. However, the situation in Myanmar is dire at the moment, not just for them but for everyone.

Is the Minister aware that in addition to the military’s crackdown on protesters, military offensives are taking place in northern Shan, Kachin and Karen states, causing the mass displacement of civilians? What are Her Majesty’s Government doing to ensure the protection of these civilians and to allow for urgent humanitarian assistance to reach them?

My Lords, the right reverend Prelate again brings the focus on to the humanitarian assistance. I assure your Lordships’ House that we are working—not through government agencies but through international NGOs—to ensure that those corridors of humanitarian assistance can be kept open. But we have seen an uptick in violence being perpetrated against protesters in Myanmar. Particularly worrying are the recent actions taken by the military and security forces during the night.

My Lords, did HMG note the piece in the 13 November issue of China Daily, welcoming the renewed mandate of Aung San Suu Kyi and her success in the election, and quoting President Xi Jinping as having said:

“China supports Myanmar following the development path of its own choice and is ready to consolidate and deepen the friendship between the two countries”?

Do my noble friend and Her Majesty’s Government believe that China could have a role in the ending of military rule and restoring Aung San Suu Kyi’s National League for Democracy to government?

My Lords, I totally agree with my noble friend: China has an important role. The statement that he quoted is of course welcome. Equally, referring to the question raised by the noble Lord, Lord Hussain, China’s intervention in resolving the situation for the Rohingya is also an important part of finding a lasting solution for all in Myanmar and in the region.

My Lords, does the Minister consider that recent events in Myanmar go some way to explaining the otherwise rather inexplicable behaviour of Aung San Suu Kyi in terms of the persecution of the Rohingya Muslims?

My Lords, will the Government say clearly that the real difficulty is the attitude of China, notwithstanding the quotation from the China Daily that we just heard, and that if the Chinese Government were adamant that they were going to shift the military dictatorship, then it would happen? Is not the truth that they are holding up progress at the UN Security Council?

My Lords, the role of China in the context of the region and, as the noble Lord rightly points out, on the UN Security Council, is an important one. I assure the noble Lord, as well as your Lordships’ House, that we will continue to engage with China to find a resolution to the restoration of democracy in Myanmar and a long-term solution for the safe, voluntary and dignified return of the Rohingya community.

My Lords, all supplementary questions have been asked.
Original Source