“This was Ethnic and Religious Cleansing, and Genocide in Progress.” – Horizon Weekly Exclusive Interview with Baroness Caroline Cox 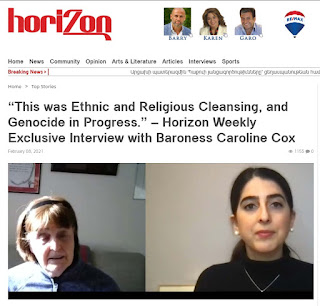 “This was Ethnic and Religious Cleansing, and Genocide in Progress.” – Horizon Weekly Exclusive Interview with Baroness Caroline Cox

Baroness Cox has sat under this title in the Lords since 1983. She is a cross-bencher in the House of Lords and founder and CEO of the Humanitarian Aid Relief Trust (HART).

Baroness Cox most recently visited Artsakh during the 44 day war against the indigenous Armenian population of Artsakh, and shared her experience and impressions. It is notable to mention she was the first foreign official to visit since the signing of the agreement November 9th..

“Clearly it was a visit of great, great tragedy. This was ethnic and religious cleansing, and genocide in progress.”

Baroness Cox shared her experiences as she witnessed the war crimes committed by Azerbaijan. She noted several violations of human rights throughout the war, and those that still continue today. Azerbaijan targeted churches, monasteries, schools, hospitals.

As the world remained silent, Baroness Cox mentioned, “Azerbaijan has huge amounts of money, and shares its propaganda everywhere.”

Many Armenian historical and cultural immovable prominent monuments have fallen under the control of Azerbaijan– including churches, monasteries, khachkars. Baroness Cox shared her concern, “There is real fear that a similar destruction may recur, in Artsakh and we are deeply worried about that,” comparing this to the destructions that took place in Nakhichevan not too long ago. “Everything Christian was destroyed, brutally.” 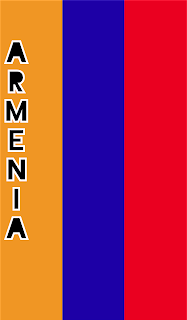 The war crimes conducted by Azerbaijan unfortunately continue, and one of the most inhumane is the prisoners of war, and civilians, held captive by Azeris and currently living in atrocious circumstances, faced with torture, mutilation, humiliation, beheading…

“One of the Azeri policy is to take a prisoner’s phone, record torture, maltreatment, killing and then send it back to the family,” she stated, “”It needs to be out in the public domain.”

In her recent article in The Tablet, she mentioned, “But it was the people of Nagorno-Karabakh who gave me heart and confirmed my faith: they do not just survive; they create beauty from the ashes of destruction. During the dark days of war and of uncertainty, there have been precious few threads of hope to cling on to. But this people’s Christian faith shone through…” She emphasized during the interview, the resilience of the Armenian people and their faith to continue moving forward.

Baroness Cox concluded with the following: “The world owes a debt of gratitude to the Armenian people, for holding your front line of faith and freedom for the rest of the people.”
Please ensure you visit Horizon Weekly and read this article in full and watch it on the YouTube channel. Here below also are some more links. *