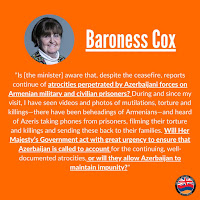 On 18th January 2021, Baroness Cox spoke in the House of Lords to ask what assessment the UK Government had made of the situation in Nagorno Karabakh and to press the Government on reports of continuing atrocities perpetrated by Azerbaijani forces on Armenian military and civilian prisoners.

Baroness Cox’s questions were followed by supplementary questions concerning Nagorno Karabakh from other Lords. Here is the full text and the picture highlights provided by ANC-UK . (AH)
Nagorno-Karabakh Question: 13:41:00 Asked by:
Baroness Cox To ask Her Majesty’s Government what assessment they have made of the situation in the Nagorno-Karabakh region.
The Minister of State, Foreign, Commonwealth and Development Office (Lord Ahmad of Wimbledon) (Con)
My Lords, the Minister for the European Neighbourhood has spoken four times to the Armenian and Azerbaijani Foreign Ministers, most recently in November, when she welcomed the cessation of hostilities. We recognise that both sides have had to make difficult decisions to ensure the safety and security of their citizens. We of course remain deeply concerned by allegations of war crimes, desecration of cultural heritage and the humanitarian situation, and continue to raise these with all concerned parties.

Baroness Cox (CB) [V]
My Lords, I thank the Minister for his reply. However, is he aware that, despite the ceasefire, reports continue of atrocities perpetrated by Azerbaijani forces on Armenian military and civilian prisoners? During and since my visit, I have seen videos and photos of mutilations, torture and killings—there have been beheadings of Armenians—and heard of Azeris taking phones from prisoners, filming their torture and killings and sending these back to their families. Will Her Majesty’s Government act with great urgency to ensure that Azerbaijan is called to account for the continuing, well-documented atrocities, or will they allow Azerbaijan to maintain impunity? 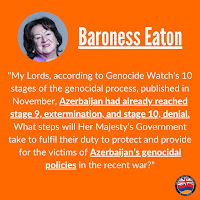 Lord Ahmad of Wimbledon (Con)
My Lords, I assure the noble Baroness that we continue to raise these issues at the highest level. My honourable friend Minister Morton, as well as my right honourable friend the Foreign Secretary, are fully engaged on this agenda. We are, of course, supporting the OSCE Minsk co-chairs in this regard. On a positive note, we also welcome the recent news of an exchange of prisoners of war that took place on 14 December. However, atrocities need to be fully looked at and investigated.

Lord Anderson of Swansea (Lab)
My Lords, Nagorno-Karabakh remains a frozen conflict and a continuing danger to regional peace. So far, our role has been limited, if not irrelevant. Can the Minister say whether we shall concentrate on human rights, religious toleration and the protection of civilians and religious sites?

Lord Ahmad of Wimbledon (Con)
My Lords, I assure the noble Lord that the points he made are important areas to consider, not just in this conflict but in any conflict. I also assure him that those very points have been made in all our exchanges, with both sides. We have also emphasised the unfettered access of the ICRC to the region.

Baroness Northover (LD)
My Lords, following up on that, can the Minister tell the House what access the ICRC and other international bodies are being given in the area, to guard against feared ethnic cleansing? What follow-up might there be to independently investigate possible war crimes committed by either side?

Lord Ahmad of Wimbledon (Con)
My Lords, as the noble Baroness may know, on 30 October, the Foreign Secretary announced £1 million of funding to the ICRC to support its humanitarian efforts in this regard. We are working with international partners on the issue of access, to ensure that all people across the region receive the aid they require. It is important that crimes are fully investigated in any conflict, anywhere in the world. That is why we are very supportive of the work by the co-chairs of the Minsk Group of the OSCE in this respect.

Lord Pickles (Con) [V]
My Lords, following the recent ceasefire, Turkey suggested that it might deploy peacekeepers to the region. Does my noble friend agree that it is a prerequisite of a peacekeeper that they should enjoy the confidence of both sides? This is clearly not the case. What discussions have my noble friend and the Government had with the Turkish Government, our NATO partner, about how they might use their facilities to reduce tension within the region and ensure co-operation, so that those who have perpetrated war crimes and acts against humanity are brought to justice?

Lord Ahmad of Wimbledon (Con)
My Lords, I agree with my noble friend on the principle that peacekeepers need to have the support of all sides to the conflict. My right honourable friend the Foreign Secretary and the Minister for the European Neighbourhood have engaged directly with their Turkish counterparts on the specific issue of Turkey.

Lord Curry of Kirkharle (CB) [V]
My Lords, we all share a deep concern and revulsion at the extent of these atrocities and lots of words have been spoken. However, it still appears that not enough pressure has been brought to bear to try to resolve this issue. Can the Minister confirm what international conversations he has had with the UN and others to bring more pressure to bear to resolve this dreadful situation?

Lord Ahmad of Wimbledon (Con)
My Lords, discussions have taken place at all levels. I have already mentioned the support given at the OSCE. There have also been discussions on this at the UN Security Council. The important thing is that the cessation and peace deal that has been negotiated holds, that there is a return of prisoners and that, ultimately, there can be peace in a region which has suffered from conflict for too long.

Lord Collins of Highbury (Lab)
My Lords, I have two quick points. Picking up on the question of the noble Baroness, Lady Northover, the Parliamentary Under-Secretary of State at the FCDO confirmed last month in a Written Answer that she had discussed humanitarian access with Russian Deputy Foreign Minister Titov. Can the noble Lord tell us a bit more about the outcome of those discussions? Also, last October we had an announcement of £1 million going to humanitarian support. Can he update us on how that money has been distributed, and on what success the United Kingdom has had in encouraging others to give humanitarian support? 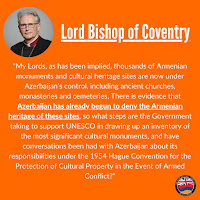 Lord Ahmad of Wimbledon (Con)
My Lords, if I may, I will write to the noble Lord on the impact of the £1 million. On discussions, we are of course raising the need both for support for all refugees in this context and for support within the region. We continue to impress on all authorities the key issue of unfettered access, also raised by my honourable friend in Russia.

Lord Bruce of Bennachie (LD) [V]
My Lords, atrocities have been reported on both sides. Of course they must be investigated and prosecuted, but this conflict has been frozen for nearly 30 years. The rights of Armenians must be protected, but so should the rights of the more than 600,000 Azeris who have been displaced for more than a generation within their own country. So does the Minister agree that the international community, while recognising Nagorno-Karabakh as an integral part of Azerbaijan, has failed to progress a long-term solution? What can be done to ensure that this settlement leads to a permanent resolution and does not become the seed of a renewed conflict?

Lord Ahmad of Wimbledon (Con)
My Lords, the important point is that all occupied territories are vacated and that, ultimately, the rights of citizens within Nagorno-Karabakh are respected. In this regard it is our view, as I have said, that the Minsk process provides the basis on which this can be taken forward, and we implore all sides to co-operate fully.

The Lord Bishop of Coventry [V]
My Lords, as has been implied, thousands of Armenian monuments and cultural heritage sites are now under Azerbaijan’s control, including ancient churches, monasteries and cemeteries. There is evidence that Azerbaijan has already begun to deny the Armenian heritage of these sites, so what steps are the Government taking to support UNESCO in drawing up an inventory of the most significant cultural monuments, and have conversations been had with Azerbaijan about its responsibilities under the 1954 Hague Convention for the Protection of Cultural Property in the Event of Armed Conflict?

Lord Ahmad of Wimbledon (Con)
My Lords, I assure the right reverend Prelate that the protection of heritage and religious sites is an important part of the discussions that take place with both sides, including on the case of Nagorno-Karabakh referred to in his question. On the issue of UNESCO making a detailed assessment of specific sites, I will need to write to him.

Baroness Eaton (Con) [V]
My Lords, according to Genocide Watch’s 10 stages of the genocidal process, published in November, Azerbaijan had already reached stage 9, extermination, and stage 10, denial. What steps will Her Majesty’s Government take to fulfil their duty to protect and provide for the victims of Azerbaijan’s genocidal policies in the recent war?

Lord Ahmad of Wimbledon (Con)
My Lords, as I have already said, I assure my noble friend that the Government have implored both sides to protect all citizens, particularly those in Nagorno-Karabakh, to make sure they have their rights protected and guaranteed. My noble friend will be aware that it is a long-standing government policy that genocide is a matter for judicial decision rather than for Governments or non-judicial bodies.

The Lord Speaker (Lord Fowler)
My Lords, the time allowed for this Question has elapsed. That brings us to the end of Question Time.