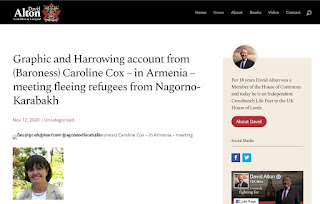 Here is a link to another press release from HART (Humanitarian Aid Relief Trust) based on Caroline's (Baroness Cox) visit to Armenia. You can read the full release on Lord Alton's website here.
Looking forward to releasing more from Caroline directly in the coming days on her return to the UK.
12 November 2020

‘MY HOME IS IN RUINS. I HAVE NOTHING LEFT’

Civilians in Nagorno Karabakh “hid under trees to escape aerial bombardments” with bodies “so destroyed” that DNA was needed to identify them, according to local witnesses who have been forced to flee their homes.

A mother-of-four told Baroness Cox on Tuesday: “My husband, a firefighter, was killed in attacks by Azerbaijan. I escaped in a car with my kids. But my home is in ruins. I have nothing left.” She said: “His body was so destroyed that we needed DNA to identify him. Everything in the village has been stolen or demolished.”
Click here to read the full article.