Baroness Cox: To ask Her Majesty's Government what plans they have, if any, to reverse their decision to cap the funding of the National FGM Centre.

Baroness Berridge Parliamentary Under-Secretary (Department for International Trade) (Minister for Women), The Parliamentary Under-Secretary of State for Education
Female genital mutilation (FGM) is abuse and we want to eradicate this practice once and for all. Between 2015-2020, the department made available over £3.5 million from the Children’s Social Care Innovation Programme to Barnardo’s in order to establish and run the National FGM Centre. The department’s Innovation Programme funding was time-limited with the proportion of costs reducing from year to year. The funding was intended to build capacity in the sector. 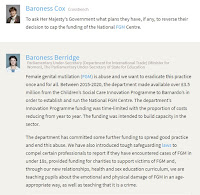 The department has committed some further funding to spread good practice and end this abuse. We have also introduced tough safeguarding laws to compel certain professionals to report if they have encountered cases of FGM in under 18s, provided funding for charities to support victims of FGM and, through our new relationships, health and sex education curriculum, we are teaching pupils about the emotional and physical damage of FGM in an age-appropriate way, as well as teaching that it is a crime.
Picture courtesy of They Work For You