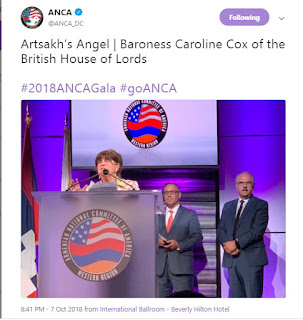 Baroness Cox was described as Artsakh's Angel at an awards ceremony for ANCA, attended by over 1000+ at the International Ballroom at the Beverly Hilton Hotel, Los Angeles. Baroness Caroline Cox was awarded the "Advocate for Justice"

The Armenian National Committee of America – Western Region announced that it will bestow its 2018 “Advocate for Justice” Award to Caroline Cox, a Member of the British House of Lords, at the 2018 ANCA-WR Gala in recognition of her consistent efforts aimed at advocating the interests of Artsakh and its people, as well as bringing international attention to the plight of Artsakh and the injustices waged against it by Azerbaijan. 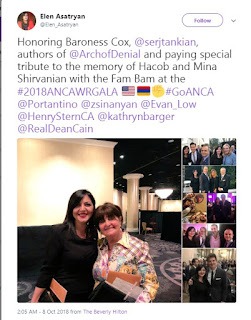 “Over the course of three decades, Baroness Caroline Cox has consistently utilized her powerful voice and all resources at her disposal to bring peace and justice to the Armenian people of Artsakh and to highlight the aggressive actions of the Azeri government and military against freedom-loving people who simply want to live in an independent state of their own choosing. As such, Baroness Cox is highly deserving of the ANCA Western Region’s prestigious Advocate for Justice award, and we look forward to her traveling from Britain to allow our community to publicly recognize her and express our collective gratitude for all she has done and continues to do for Artsakh and for our Cause,” stated Nora Hovsepian, Chair of the ANCA-WR.

To read more about Caroline's efforts to bring peace then please visit HART and read this great post by the HART team!